The Edinburgh and Glasgow trips

This page began life as a write-up of visits to Edinburgh and Glasgow  in 2013, but has now been updated and expanded (in 2021). Our gentlemen’s excursions in 2013 were civilised (honest) days out from Durham, visiting the best pubs and trying some of the best beer in each city, plus a little bit of culture as well. Ted and I have been back to both cities regularly since then and we’ve been able to check the information and update it where necessary. There is plenty information about both cities online and in guide books, so we’ve kept the focus on the pubs, but added more photographs and practical information.

Back in 2013, we arrived in Edinburgh just before noon, left Waverley station by the Market Street exit, crossed the road and climbed the Fleshmarket Close stairs to the Halfway House…..about 30 seconds from platform to bar. The pub has a fine range of mainly Scottish beers, is so small that you are bound to getting chatting to someone and there is usually a mixture of locals and tourists. It remains Steve and Ted’s pub of choice when changing trains in Edinburgh. 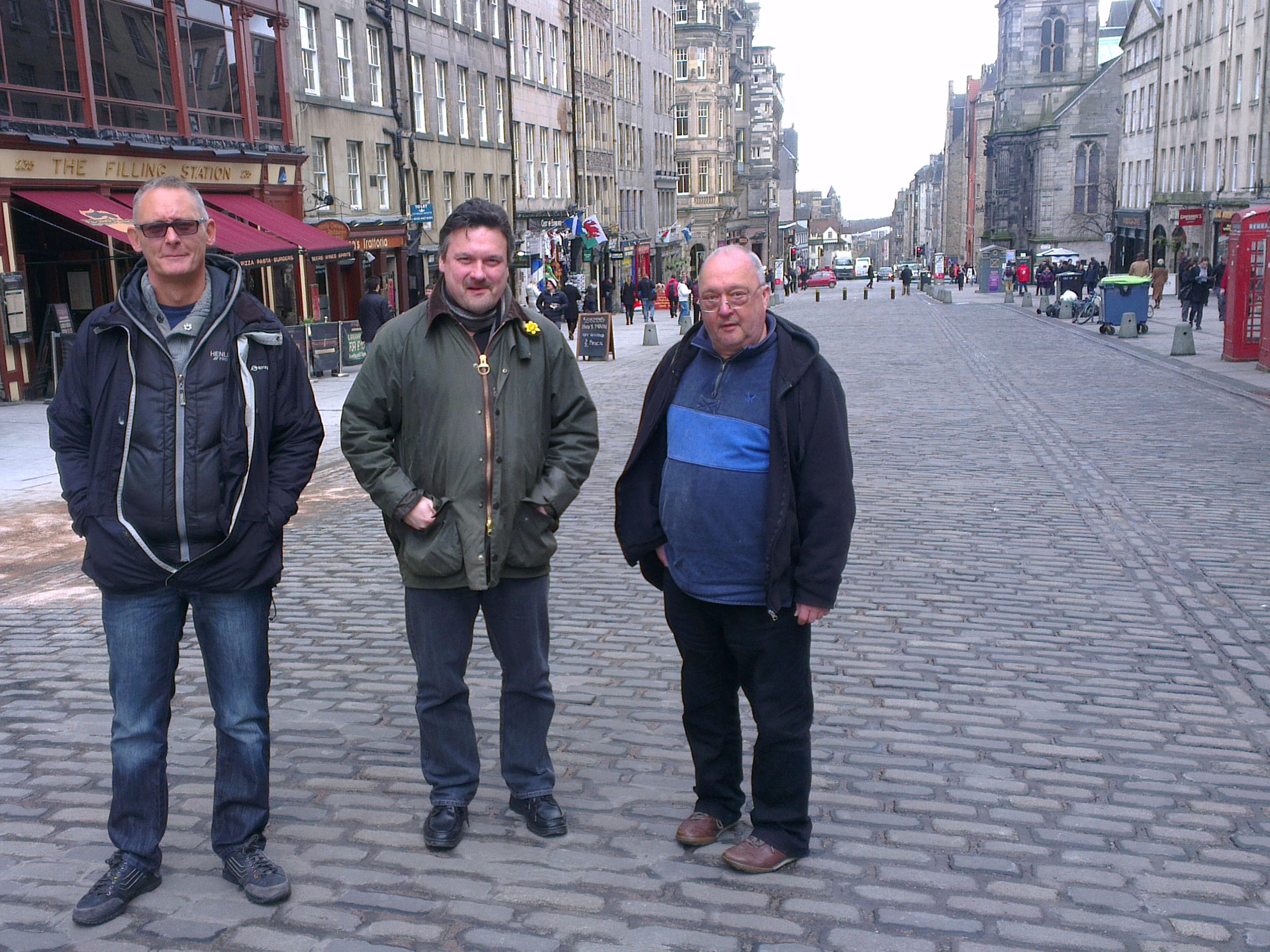 Steve and Teds companions on these trips, High Street, Edinburgh

From there we climbed the stairs to the Royal Mile, walked a couple of hundred yards up the High Street then along George IV Bridge to Forrest Road and into Sandy Bell’s. The pub is famous for its folk sessions any night of the week…..and at lunchtimes it is just a good pub, with good beer. 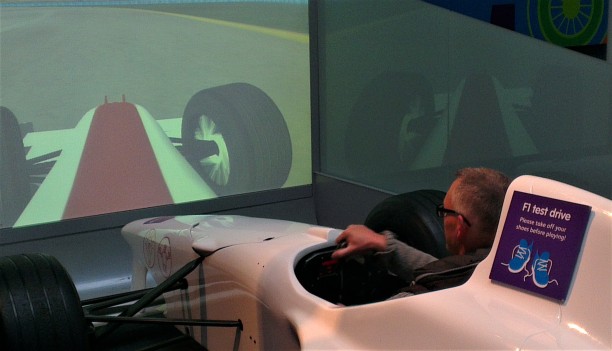 High culture in the National Museum

Then it was time for the cultural bit. Just round the corner in Chambers Street is the National Museum of Scotland, recently expanded and remodeled. The highlights for us were Dolly the Sheep, the chance to drive and crash an F1 racing car and try on an astronaut suit, the building itself, and a visit to the roof – it was cold, wet and windy that day but the views over the city are worth it at any time.

Busy day in the Diggers

We jumped onto the bus from directly outside the museum, which took us via Tollcross to Angle Park Terrace and the Diggers, discovering en route that, in Edinburgh as elsewhere, some of the solid old districts are now full of new and expensive flats, retail parks and the like.  Officially known as the Athletic Arms, the pub is next to Dalry Cemetery, hence the name. It was famous in its heyday for the sheer amount of McEwans 80/- that was poured down peoples necks on match days (or any day) – the Hearts

ground is nearby. It remains a fine example of a corner tenement pub, with good beer, excellent pies and, on our visit, a TV crew looking for a Hearts supporter to interview (the only one they could find was the barman). Most of the group visited again in 2017 when there was a Six Nations rugby match at nearby Murrayfield and the pub was packed.

We caught the bus back into town and hopped off at the West End of Princes Street and into Mathers Bar for more beer and more pies. Nice. Next was the Oxford Bar, a basic friendly boozer, now famous as being the pub where Inspector Rebus drank. Then we walked along Rose Street which, back in the day, was the Edinburgh equivalent of Newcastle’s Bigg Market. That day the street was full of tourists on a pub crawl (not us – we were on a serious expedition). Many of the Rose Street boozers are nothing special – one exception is the Abbotsford, where the bar staff can match beer and whisky. A pint of Stewarts No3 and a smoky Islay malt worked a treat. Incidentally, Stewart’s brew fine beer, they have recreated an 80/- very similar to McEwans, and the No3 (no longer listed in the 2021 Good Beer Guide) is (or was) a an excellent version of Younger’s. 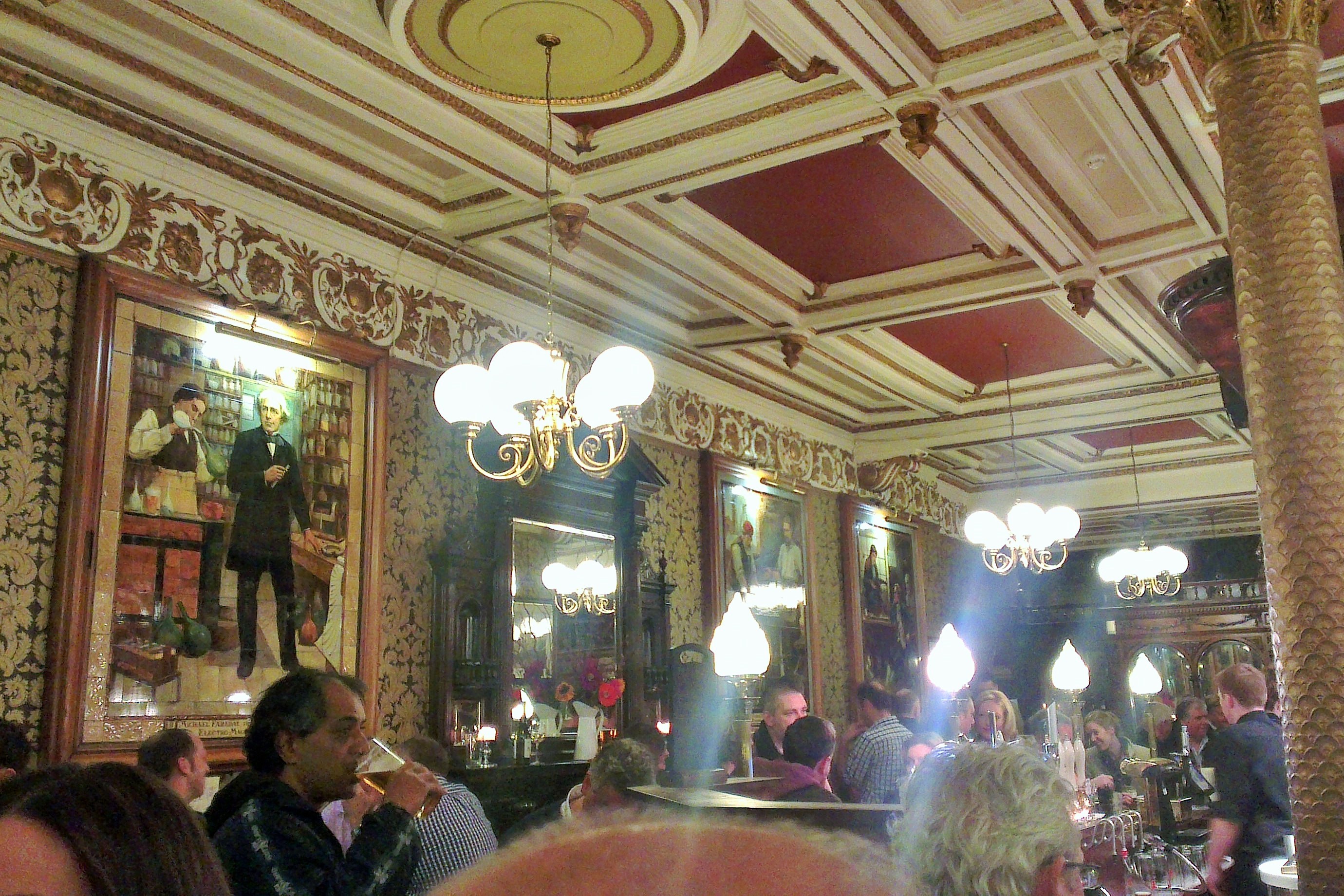 Our final port of call was the Café Royal – pictured above. If it is your first visit walk in and go wow….it is not your typical pub décor. Steve can remember his first visit, as an underage drinker in 1972, being gobsmacked by the opulence. The beer (and the food) is pretty good as well. From the Cafe Royal it is a two minute walk (or a one minute run) down Waverley Steps (now the Waverley escalator) and on to the last train home. We made it uneventfully on this occasion, unlike once in the 1980s when Steve did the same, the train pulled out and he realised his bag was still in the station left luggage office. The journey home to Newcastle then involved alighting at Dunbar, catching a train back to Edinburgh, collecting the bag and convincing the guard of the sleeper to London to let him travel in the guard’s compartment for his journey.

Info – the pubs, the city and getting around

Since our 2013 trip Ted and Steve have visited most of the pubs mentioned regularly (most recently in 2019 due to lockdowns), with the exceptions of the Diggers (last visited in 2017) and the Oxford Bar, both of which we’ll take in on our next visit. They all remain recommended. Note that the Halfway House and Sandy Bell’s remained closed on our most recent visit in September 2020, too cramped to operate within social distancing restrictions. There are plenty of other decent boozers in Edinburgh – follow this link for our favourites Pub Guide Edinburgh and Glasgow. On our 2013 visit we survived on hot pies (in the Diggers and Mathers). However, the food in the Halway House, Sandy Bells and the Café Royal is worth a try, and of course there are umpteen restaurants.

Getting around Edinburgh is easy. You can walk around the Old Town and New Town…but it is hilly. Take the bus or tram – the network is good, cheap and frequent. The single  fare (March 2021) is £1.80 any distance and a day ticket is £4.50. Note that bus drivers cannot give change. Info, timetables and maps are available at www.lothianbuses.com . The trip out and back to the Diggers is best done by bus. The bus from the National Museum to the Diggers (Angle Park Terrace) is the no. 35 and from the Diggers to the city centre (Princes St) catch the no. 34 from Angle Park Terrace or the no.1 from round the corner in Henderson Terrace.

We did this as a day trip but you may wish to stay longer to explore the sights (and the other pubs). The highlight of the year is, of course, the Festival, though unless that is the reason to visit, you may wish to choose a time of year when it is not quite so heaving with visitors and accommodation is cheaper. It is the situation of Edinburgh which makers it such an attractive city and one of the main pleasures is to simply wander around. These views give you some idea of the city. 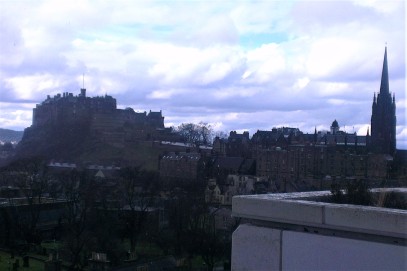 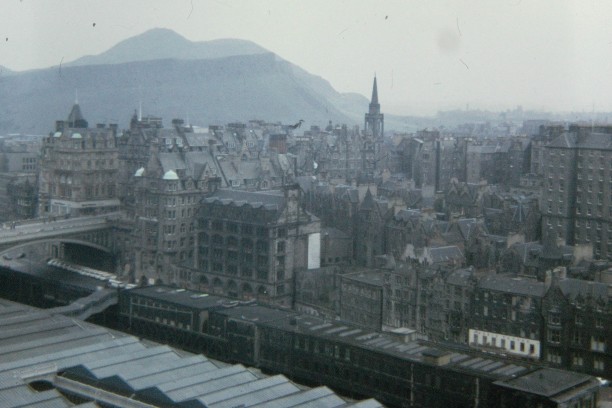 A few months later the same group of reprobates decided on a day trip to Glasgow. This time we started in the West End and worked our way back to the city centre. From Queen Street station there is a walkway to Buchanan Street Subway station and it’s four stops on the subway to Hillhead, followed by a two minute walk to our first stop – Tennents Bar. Like many of the other best pubs in Glasgow (and Edinburgh) it’s a Victorian tenement corner pub. Almost fifty years (good grief!!) since Steve first had a drink in there it still has the same eclectic mix of drinkers…but a much better range of beer.

Tennent’s Bar – not taken on the Friday lunchtime we visited!

From there it was a 10 minute walk down Byres Road to Partick Cross (or one stop on the subway to Kelvinhall) and the Three Judges. Plenty of hand pumps and a friendly boozer. 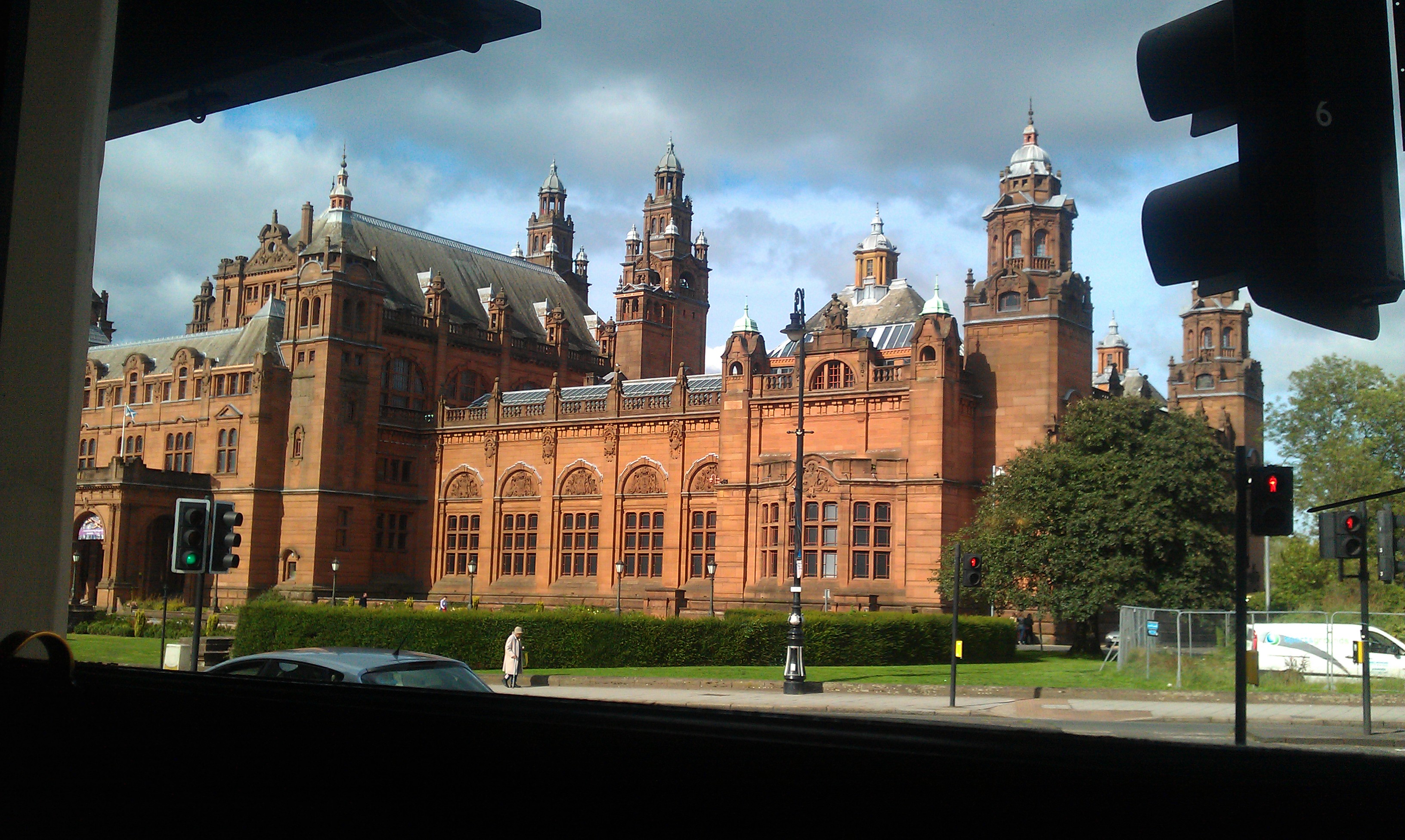 We were heading for a late lunch in Mother Indias Café, but stopped off at Brew Dog to be nosey – this was the time when they seemed to be opening pubs all over the place. The beer was all craft keg…it seems like a pity to make a decent beer then killing it. Steve may be in old fart mode…but it’s not his type of beer (though a thousand times better than John Smiths) or pub, particularly when there are cask beer outlets nearby. Mother Indias Café was one of the first places to introduce Indian tapas type meals, so you can try several over a meal. The food is excellent food and freshly spiced. Yum.

We returned to the city centre by bus and made our way to Hope Street and the Pot Still. It is famous for its range of whiskies, and the staff are very knowledgeable about them……it also sells two or three real ales kept in good condition. Our recollection starts to get vague about here…mainly because we all tried the whisky….but we did have the chance for a final pint in The Horse Shoe – an essential part of any Glasgow pub crawl. It can get mobbed and the TVs can be intrusive but the beer and service are good, and it’s a cracking building. From there it was a final stagger to Queen St Station and the train back home.

Info – the pubs, the city and getting around

Ted and Steve have visited all of the pubs mentioned (except Brew Dog) regularly, most recently in 2019. There are of course, plenty of other decent pubs in the city and our favourites are listed in our guide Pub Guide Edinburgh and Glasgow. Our 2013 visit was a day trip, giving us about six hours in Glasgow – a bit of a rush and to really see what the city has to offer it would be better to stay over. Our bit of culture on this visit was the food at Mother 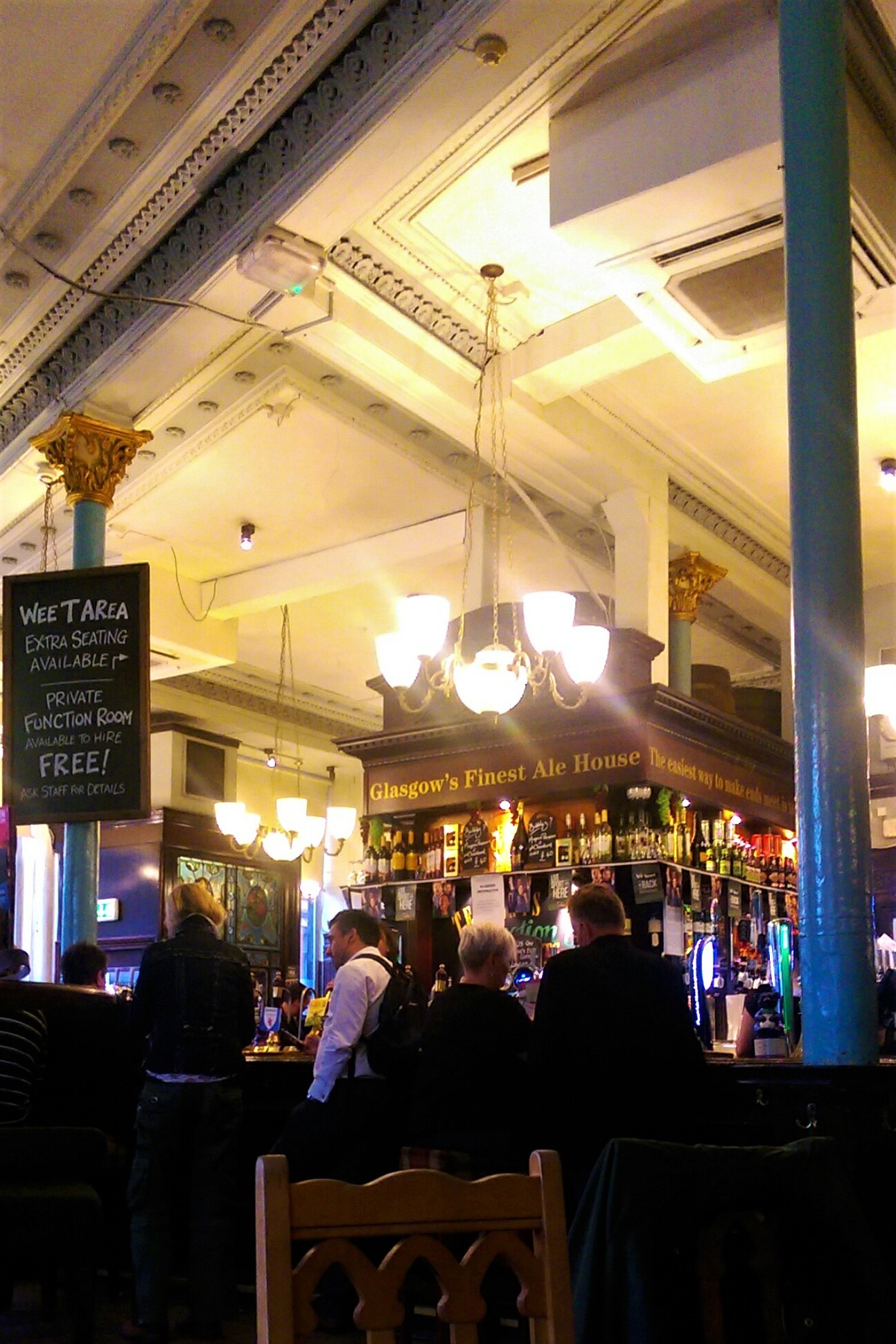 Indias Cafe, which remains highly recommended. It is opposite Kelvingrove Museum and Art Gallery, there are no reservations and there are often queues at busy times.

The Horse Shoe and inside Tennents

The easiest way to reach the West End from the city centre is by subway to Hillhead or Kelvinhall, though it is possible to walk or catch a bus if you want to see what the city looks like above ground. Info about the subway is at http://www.spt.co.uk/subway/, the single fare is £1.55 and the day fare is £3 and the journey is an experience in itself.  Details of buses are at http://www.firstbus.uk/greater-glasgow. Single fares are from £1.70 for a short hop and a day ticket is £4.70.

For a bit of culture linked to this trip then try Kelvingrove Museum and Art Gallery. Well worth it and it is directly across the road from Mother Indias Café. The Riverside museum, about 10 minutes away by the River Clyde (no surprise there) has a transport and technology focus, is also excellent – Ted and Steve always take new visitors to the city there. More details at http://www.glasgowlife.org.uk/museums/ 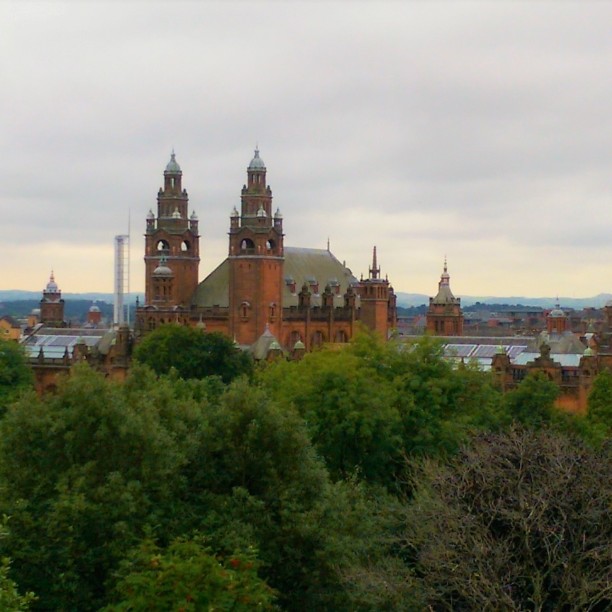 Kelvingrove Art Gallery and Museum, above, and the Riverside Museum, below. 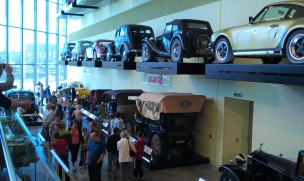 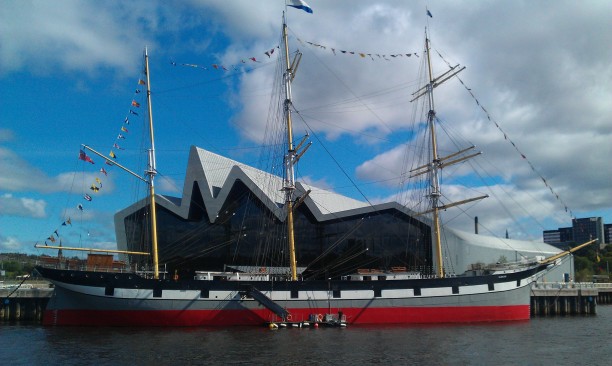 Finally, a few views of some of the city’s other sights – the City Chambers, the Gallery of Modern Art and Glasgow University.

Thanks to the gentlemen: Dave Kerridge, Dave Webster and Kochen Werres.

Now, which subway gets me back into town.