Andalucía – Guides, journeys and getting around.

The Rest of Spain – Journeys, guides and where to stay.

Ted and I have spent quite a bit of time in Spain over the last 30 years, initially for holidays, more recently because it is as easy for me to work from Spain as the UK while enjoying the better climate. Our base is on the Costa del Sol near Málaga, from where we have travelled around many different regions of the country. This page aims to help others visit the places we have seen and, hopefully, come to appreciate Spain as much as we do.

We start off in Andalucía (immediately  below), the region that covers much of Southern Spain including the Costa del Sol. Scroll down for The Rest of Spain and the journeys across the country that Ted and I have taken in recent years.

There is, of course, much more to the region than the coastal resorts and Ted and I strongly recommend people to visit the real Andalucía – even if only for a short break from the poolside. However, we begin with our home town of Benalmádena, before looking at the rest of the region and the major cities in particular. We have concluded with  practical information on getting around the region. 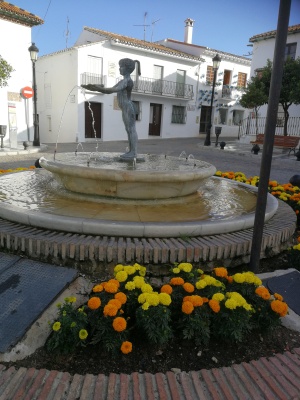 Benalmádena, Ted and Steve’s home in Spain, is located on the Costa del Sol, not far from Málaga city and airport. There are three distinct parts of the town. Benalmádena Costa is a popular holiday resort for Spaniards, Brits, Scandinavians and other nationalities. You can enjoy yourself doing nothing else but lying on the beach and drinking in the bars along the coastal strip. However, there is much more to the area. Arroyo de la Miel, a little back from the coast, is the main urban area where most of the locals live. Finally, the historic original village a few kilometres inland, Benalmádena Pueblo (pictured), is worth a visit and has its own attractions. Follow this link to the Introduction to Benalmadena  page  for more detail. 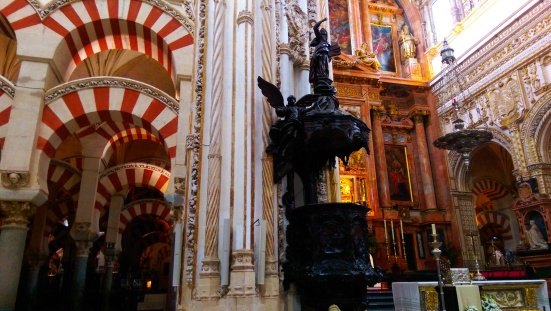 Benalmádena is on the main route along the coast with easy access to other resorts such as Fuengirola and Marbella. It is also close to the city of Málaga, capital of the province and one of the main cities in Andalucía. It is well connected to the rest of the region which is rich in history and scenery. It includes cities such as Sevilla, capital of Andalucía, Granada, home of the Alhambra, and Córdoba (the photo was taken inside the mosque/cathedral in Córdoba). There is plenty beautiful countryside, including the mountains and lakes inland from Málaga, the Sierra Nevada and the Alpujarras near Granada, and the Atlantic coast between Gibraltar and the Portuguese border. Throughout the region there are many historic small towns which are worth a visit. Click here for the Introduction to Andalucia  guide, originally written for friends visiting Benalmádena and expanded to provide an overview of the places that can be visited on a day trip or short break from the coast. 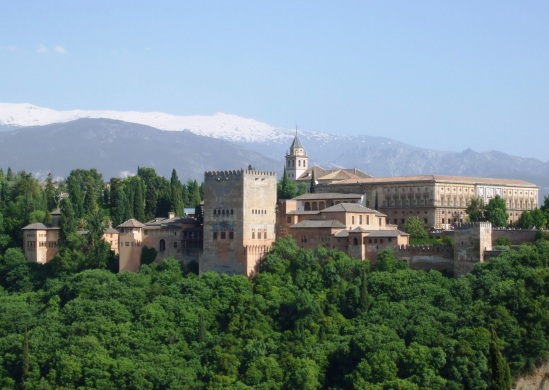 Málaga city is an easy journey from the Costa del Sol resorts. It has become a major tourist destination in its own right, yet many people never make the minimal effort that is required to visit. The other major cities of Andalucía – Sevilla, Granada (pictured) and Córdoba – are all easily accessible from Málaga and are tremendous locations for a day trip, overnight stay or a city break in their own right. The town of Ronda, perched on a ridge inland from the Costa del Sol is also well worth a visit. Over the years we’ve been to all of these places regularly and we have prepared brief city guides to each of them, which will be regularly updated. Recently we visited Jerez de la Frontera and Cádiz and have added an introductory guide to them. Click on the following links to view the guide of your choice: 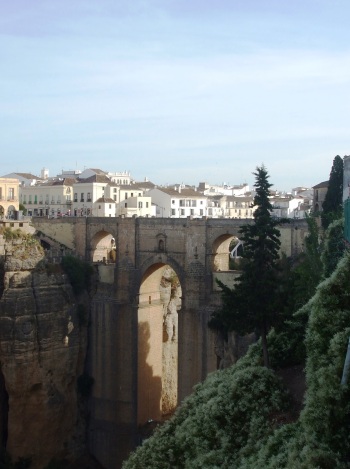 Ted and I have also spent time other places in Andalucía apart from the cities and towns above. Between 2018 and 2021 we have made four visits to the Alpujarras, a region in the mountains southeast of Granada, usually based in the village of Capileira. There are notes of these visits here: The Alpujarras . In 2019 we visited Baeza, in the province of Jaên as part of a journey across Spain – see Andalucia to Aragon  .

In the past we have been to places such as Arcos de la Frontera, Sanlucar de Barrameda and Ubeda. For ten years we had a house off the tourist trail in the town of Campillos, and visited nearby Antequera regularly. These places are all mentioned in the Introduction to Andalucia but it is too long ago to provide an up-to-date guide. On request Steve can provide basic information, from what he remembers of these places.

Getting around Andalucía – travel by train 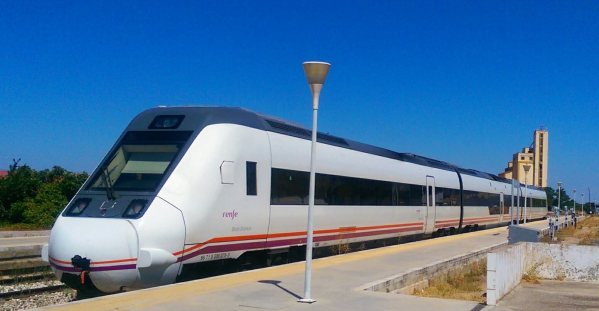 Trains in Andalucía are modern and fast, with high speed lines linking Málaga with Córdoba, Sevilla and Madrid. These have been updated for 2019. On the Costa del Sol there is a frequent local train service which links Málaga with Fuengirola via Málaga Airport, Torremolinos and Benalmádena.  For timetables of trains to these places click on the links below:

APRIL 2020/ OCTOBER 2021: Train and coach times will not be updated until it is clear that the temporary reduced timetables during the pandemic have been superceded by more permanent arrangements. The basic frequency on the Malaga – Fuengirola line (every 20 mins) is unchanged.

Getting around Andalucía – Travel by coach

Many places, particularly along the coast, are easily reached by coach. Examples include:

– from Benalmádena to Marbella, Estepona and Algeciras;

– east from Málaga to Nerja and Almeria;

– inland, to Ronda from Benalmádena or Málaga;

– Granada, which has no rail link to Málaga at present, is reached by frequent express coaches from Málaga. Click on these links for details:

Getting around Andalucía – Further Information

I have more detailed timetable information available if you are interested in  a particular journey in Southern Spain, and can help you find information for the remainder of the country. Some of this can be quite difficult to find as there is a lack of printed timetables, and many coach and train websites are of limited use. There is no comprehensive public transport journey planner such as Traveline, or similar sites in other European countries, and information can be difficult to interpret. To contact me email gowithted@btinternet.com

The view is from El Palo, Málaga, at sunset.

The Rest of Spain

And then there is the remainder of Spain – Andalucía is only one region and Spain is a big country. We’ve travelled widely in Spain, starting in 1990 clutching a London to Málaga return by train, visiting both Barcelona and Madrid for the first time. In the last few years Ted and I, and my notebook, have wandered through various parts of the country by train and coach, and written up the experience. These recent journeys are:

To read the accounts of these journeys click on the following links: 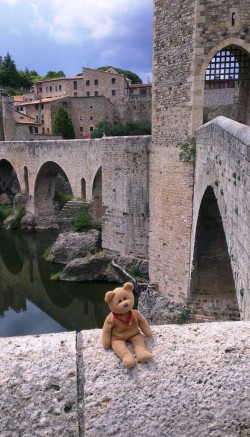 In the less recent past we’ve visited Madrid, Barcelona and Catalunya, travelled along the north coast from Bilbao to Oviedo,  from Madrid to Cáceres and on to Lisbon by train, from Santiago de Compostela to Madrid via Pontevedra, Vigo and Avila, and to Soller on Mallorca. These trips are too  long ago to write about accurately but I can provide basic information on request and plan to provide some brief notes on some of these places. The first note is The Catalan Coast which Steve visited as a tour manager for Great Rail Journeys and Ted stowed away

This is Ted in Besalu, Catalunya, while stowing away on the tour.

Most of the city guides which I’ve put together are for Andalucía (see above). However Ted and I have visited Valencia three times since 2014, most recently in October 2019 – we were impressed by the city, and I’ve put together a brief guide, which can be read by following this link: Guide to Valencia (page updated January 2020)

We have spent a few days in Madrid and Barcelona several times, but not for some years. I don’t think I can add anything at present to the information available in the major guidebooks and online. The next time we visit however, I’ll put a few notes together.

Where to stay in Spain (and where not to!) 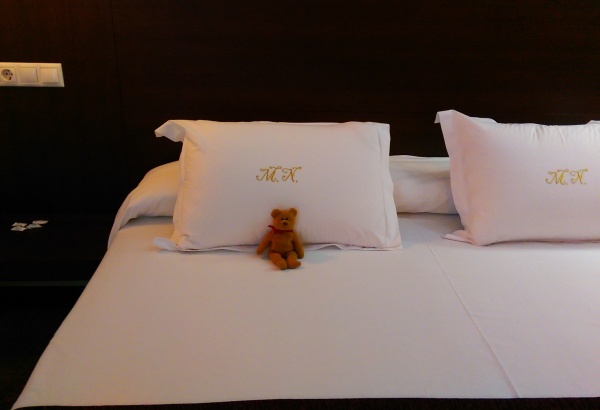 We have stayed in many hotels during our travels in Spain, a few which were tremendous, many that were pretty good though unexceptional, and a few that were dire. The worst ones mainly date from when we had to do things on the cheap -unsurprisingly, by and large you get what you pay for. However some of the most expensive are also some of the most bland. We’ve put together Where to Spay in Spain, based on our experiences and newly updated for 2020- follow this link: WHEREtoSTAYinSPAIN 2020  (PDF, 2.5Mb).