This site began life a few years ago as my personal Google site, to share with a few friends. It has grown to include a lot of information that may be useful or enjoyable for a wider audience. The name of the site stevecolinted was not easy to remember, and by  2017 the space on the Google site was full. I took the decision to rewrite and relaunch the site, splash out on a domain name, and switch to WordPress. Transferring content was not as simple as it seemed and neither was WordPress, I hope that any glitches have been sorted out by now. Gowithted continues to expand and develop and I hope that you enjoy it. so apologies for any glitches. Maybe I should persuade the bear to learn coding. Photo above by Gill Sladen.

This page is provides a little background about Steve, Ted (and Colin), plus a few photos of us. Steve Gillon. Updated August 2020. 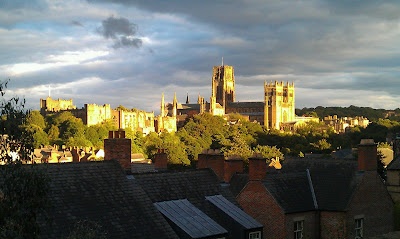 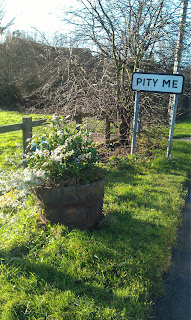 Ted and Steve live in County Durham, Northeast England, and in Benalmádena, Southern Spain. The UK base is Pity Me,on the edge of Durham City, (check out the name on Wikipedia), formerly a pit village, but now effectively a suburb. Durham is a historic university and county town built on a defensive site on the River Wear, with the cathedral and castle at its heart. The photograph is the view of the cathedral and castle from the railway station. As you can see from the second photo, of the Pity Me entry to Britain in Bloom, Pity Me is renowned for innovative  floral displays (not).

Ted was discovered in a bargain bin for £1 twenty-two years ago. His stuffing is still in good health and he is still going strong. He came on holiday with us and kept Colin company when work took me away from home. He now comes with me wherever I am.

Colin was my partner of 25 years, but was unwell for several years, and died in 2012 of pneumonia while on the waiting list for a liver transplant. He knew about this site, but wasn’t able to take part in putting it together.

As for me, I worked for many years as Director of Operations for the fuel poverty charity National Energy Action. For

the last 18 years I have worked as a consultant, mainly for NEA and for the Renewable Energy Consumer Code, auditing its members for compliance. From 2007 to 2017 I was a freelance tour manager with Great Rail Journeys leading tours around Europe. I am now winding down my commitments, with a view to retirement. Otherwise I spend the time relaxing, drinking beer and cooking  when not travelling with Ted. Steve Gillon.

Gallery – Steve Colin and Ted through the ages….

To bring things up to date:

It was Mum’s 90th birthday in January 2019, seen here with my brother. However Mum passed away in November 2019 and is sorely missed. During 2019 we travelled as usual (we’re seen here in Capiliera, Spain) and the results are written up in the travel pages. As you will all be aware 2020 has been different and we’re stuck at home most of the time – hopefully things will improve soon. Steve Gillon August 2020.

Thanks to all our friends for their company and help over the years, particularly when things were at their most difficult.

Thanks also to those who took those photographs above which we didn’t take ourselves. In some cases I can’t remember who did, and a few were probably taken by passing strangers whose names we never knew.