Ronda is a beautiful town set in an incomparable setting in the middle of the mountains behind the Costa del Sol. A visit is worthwhile both for the journey and the destination. A day trip from the resorts on the Costa del Sol is easy, though staying overnight will allow more time to explore the town itself. 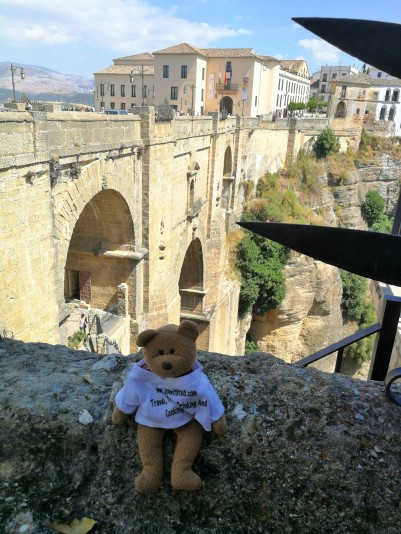 Orientation is easy. The town is split in two by the deep El Tajo gorge, crossed by the eighteenth century Puente Nuevo (New Bridge – above). To one side is the old town (La Ciudad) which is a labyrinth of narrow lanes.  This part of town is ideal for walking around and also includes the cathedral, town hall, and local museum. On the other side of the bridge is the newer part of the town, known as Mercadillo, which includes the two main squares, the Plaza de España and the Plaza del Socorro, the bullring, most of the bars and restaurants and the main shopping streets. The bus and railway stations are to the north of this area, about 10 and 15 minutes walk respectively from the Puente Nuevo.

The orientation plan below gives an idea of how the town is laid out. For a more detailed map visit the Ronda tourist office website www.turismoderonda.es

*          the Puente Nuevo bridge and the El Tajo gorge (accessed by paths from the Old Town). There are several viewpoints over the gorge from both parts of town.

*          Casa Juan Bosco in C/Tenorio, ot so much for the house itself, but for the gardens which have a tremendous view of the Puente Nuevo. (C/ = Calle = Street). The photograph at the top of this pagewas taken from there.

*          the bullring, the oldest in Spain (pictured, outside and inside), and the bullfighting museum. 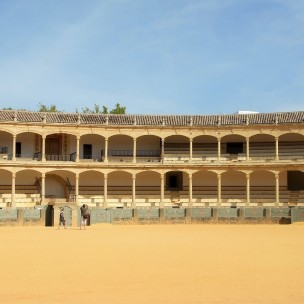 Places to eat and drink –

There is a large selection of bars, cafes and restaurants. Almost all will serve tapas, with many selling a tapa selection of 4 or 5 dishes for about 10-12 euros. Good quality everywhere – the only places to avoid are the restaurants along the little street between the bullring and Plaza de España, which target (and rip off) the visiting coach parties. The main concentration of places is in the Plaza del Socorro (pictured) and the side streets leading off it. A few suggestions: 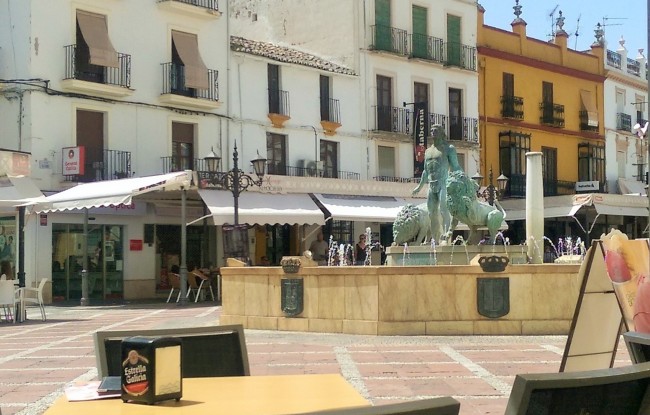 *          Apart from Plaza del Socorro itself, nearby Faustino in C/Santa Cecilia serves good tapas, and the restaurant to the rear is busy even when everywhere else is quiet. Bodeguita El Coto in C/Nueva is a traditional Spanish bar serving good tapas.

*          In the old town El Campillo has a pleasant terrace on a quiet square (Plaza Maria Auxiliadora) and there are two pleasant café-bars in the square by the town hall and former cathedral.

*          Café-Bar San Francisco, in the area of the same name, just outside the old            gateway at the far end (bottom) of the old town, serves excellent tapas in the  bar, and the restaurant and bodega have a good reputation. 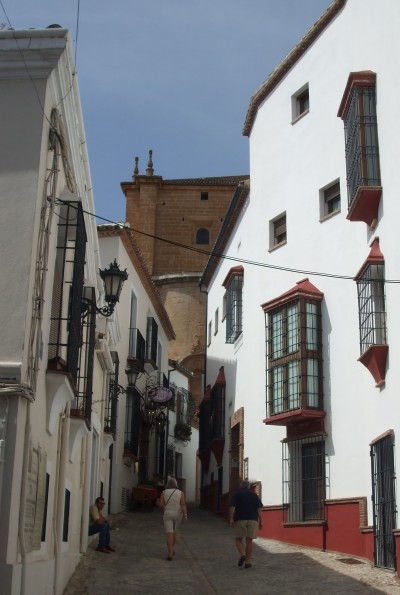 The four-star Catalonia Reina Victoria (C/Jerez 25) is one of the top hotels in town with tremendous views over the surrounding countryside. Can be expensive but there are good deals online from time to time. Details at www.hoteles-catalonia.com .

The four-star Hotel Maestranza in C/Virgen de la Paz, across from the bullring (but quiet inside) is also good. Details at www.hotelmaestranza.com.

Otherwise the Rough Guide to Andalucía has recommendations, from the cheapest to the most expensive, including a number of places in the old city.

*          the tourist information office is in the small square opposite the entrance to the bullring.

*          There is a Maskom supermarket at the corner of C/Molino and C/Jan Jose (between the bus station and the town centre) which sells cheap water, wine and picnic supplies. 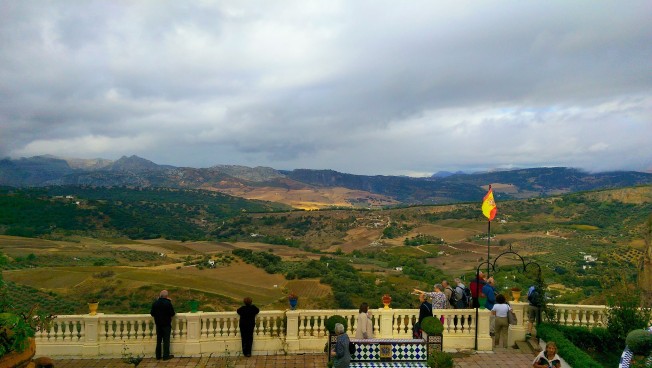 A variety of scenic journeys to and from to Ronda are possible by public transport – either as a day trip or with an overnight stay in Ronda. There is interesting scenery on all routes. Coaches and trains are usually comfortable and punctual, but they may be busy on Friday and Sunday afternoons from about 1500, and at Spanish holiday periods.

Coach services from the Costa del Sol. There are 5-6 services to Ronda daily from Torremolinos and resorts along the coast to Marbella. between Fuengirola, Marbella and Ronda.

Coach services from Málaga. Up to 9  journeys daily operate from Málaga to Ronda via Ardales taking 1.5 to 2 hours. For times see LINK A bus via remote mountain villages such as El Burgo leaves Málaga at 1400 (Monday-Saturday)  and takes just over two hours.

Train services.  There is a daily direct train from Málaga to Ronda via the scenic El Chorro gorge. It leaves Málaga at 1005 daily and Ronda at 1655, which gives 5 hours in Ronda. If staying overnight, additional services are available by changing at Bobadilla. Three trains daily operate Granada – Antequera – Bobadilla – Ronda – Algeciras (there is a replacement bus service Granada – Antequera at present, August 2018). There are two daily trains between Ronda and Madrid. The railway line between Ronda and Algeciras is scenic and can be combined with regular coach services between Algeciras, Marbella and Málaga to make a circular trip.

Ted ignoring the view over the surrounding countryside from Ronda