A few pictures of transport in Glasgow, where Steve spent the first twenty-something years of his life. Until I left home in 1972 we didn’t live near a station, so this section has be broadened to include all forms of public transport and not only trains.. Since you rarely photograph the everyday occurrence, these are mostly not my photographs, but they have been chosen because they bring back memories.

As a child I occasionally persuaded my parents to take me on the Subway, Glasgow’s Underground, then used it regularly in the 1970s, as a student and commuter until it closed for modernisation in 1977.  Opened in 1896, it is the third oldest underground railway in the world, and the original coaches remained in 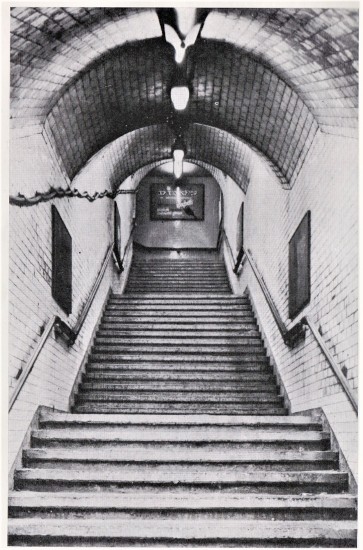 use, albeit modernised, until 1977. The first view is of St Enoch station in 1977, which captures the feel of the Subway perfectly (apart from the distinctive smell). The second picture is of Kelvinbridge station, hidden at the bottom of a tenement at the foot of steps from Great Western Road (there was a smelly lift which worked from time to time). For several years the sign read ELVIN RIDGE, which sounds as though it was named after a local jazz musician. The third picture is a 1970s view of the only way up from the platforms at Buchanan St station (one of the busiest on the system) to street level.

I hadn’t known until recently that several of the old carriages ended up in County Durham at Beamish Museum, They have not been on display – some of the electrical equipment was used as spares  to keep the museum’s collection of trams running.

This is the subway in its current incarnation, with a train at Kelvinbridge station. The cars are painted bright orange, except for this one which was turned out in the original 1896 livery. This will change again soon as new carriages are currently under construction. 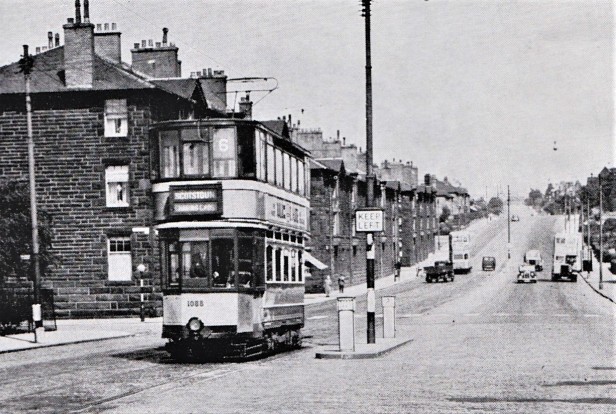 I am (just) old enough to remember trams in Glasgow – they disappeared in 1962. I can remember a couple of journeys on the final routes to disappear and being taken to see the last tram procession. This 1950s photograph is taken fairly close to our home – this is Cumbernauld Road with Riddrie to one side and North Carntyne on the other. While I recognise the scene, I don’t remember trams here (they finished in 1958-59). At some time after the tramway was laid the road must  have been widened – but, to the end, city-bound trams used the wrong side of the road. 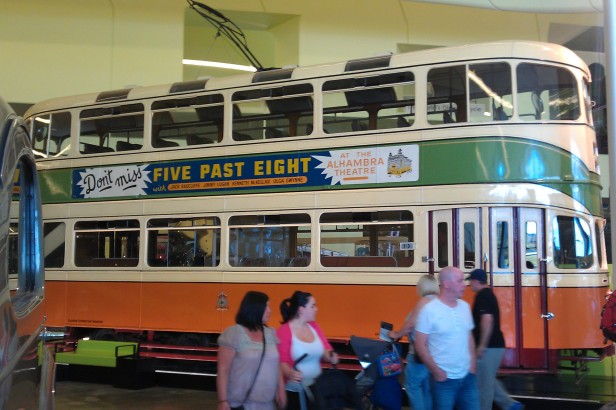 There are now a collection of Glasgow trams in the Riverside Museum in Glasgow – an excellent museum of transport and social history. This is the type of tram I remember travelling on most often – the most recent in the fleet. 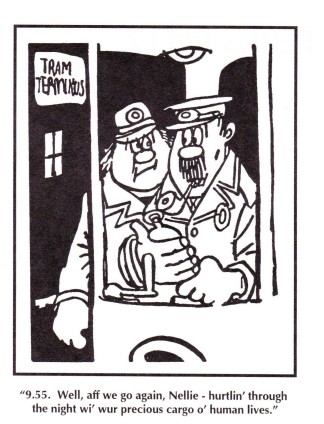 A couple of cartoons by Glasgow cartoonist Bud Neill, featuring life on the tramcars and the lost art of tram (and bus) conducting.

The 106 trolleybus replaced the trams on Cumbernauld Road in 1958. It only lasted less than ten years before bus replacement but  I must have used the 106 hundreds of times in my childhood. This is a photograph at Riddrie terminus. Yes – the stance is on the right hand side of the road – a high step down into (occasional) traffic, and particular fun on dark and icy nights (and many times my folks must have been carrying my younger brother’s pushchair).

Not living near a station,  I never got into trainspotting. However, here is my Ian Allan bus-spotters handbook for Glasgow Corporation Transport, published in 1963, and my guess is that I spent my pocket money on it in 1965. The timetable is dated May 1964 (though it looks like I’ve used the cover to check whether pens are working). Looking through them now they are pieces of social history – a glimpse of how the city was served before the wholesale demolition, depopulation and rebuilding of the next twenty years. 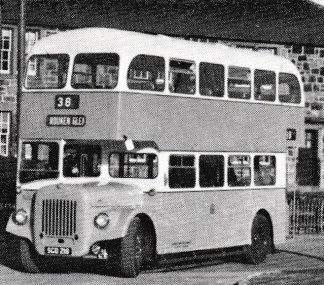 The 38 was one of the routes that we used often to get into town – this bus is at Millerston terminus on the city boundary in the 1960s – I’ve checked the bus-spotters handbook and it was new in 1959. And I had to include this picture of one of the best names for a tram, then later the 64 bus terminus – Auchenshuggle. It isn’t used as a terminus any more though the current incarnation of the 64 passes by infrequently – in 1964  it was every 4 minutes in the peak periods. 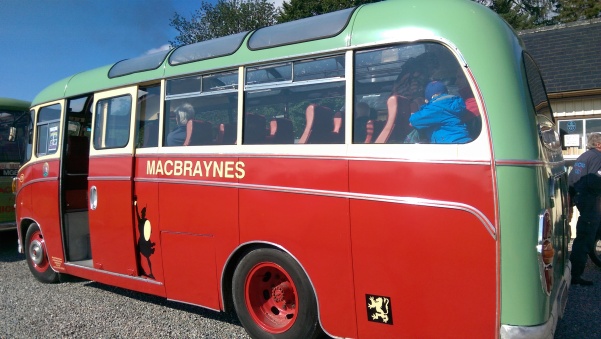 This photo was taken in 2015 at Broomhill on the Strathspey Steam Railway of a preserved Macbraynes bus heading for Grantown on Spey. It’s here because on the way to secondary school in the late 1960s I would pass buses like this leaving the Parliamentary Road bus station for distant Highland places that I’d never been to. 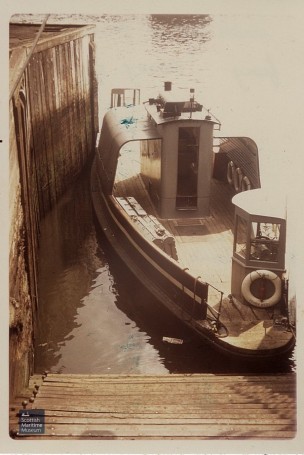 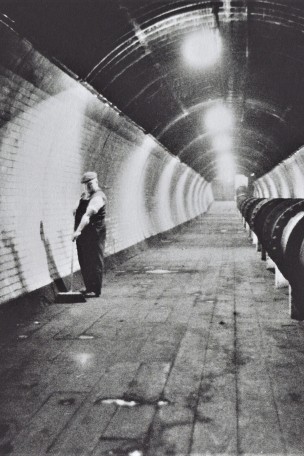 While the city’s docks were active a network of ferries and a tunnel were used to cross the river. The Finnieston Ferry was the last passenger ferry, withdrawn in 1977, and the Finnieston Tunnel (officially the Clyde Harbour Tunnel) was in public use until 1980. The ferry is pictured in 1935, and the same boat, ferry No.10, was used until closure. The Finnieston Tunnel also carried a main water main, which presumably still exists. A friend and I visited both in 1975, to see whether they still existed. We were the only people around, except for the ferryman. The tunnel was damp, dripping and eerie, though would have been busy with dockers in the past.

The St Enoch photo is by Oscar Marzaroli and is from Shades of Grey, Glasgow 1956-1987, Mainstream, 1987. Tremendous photographs by Oscar Marzaroli and equally excellent words by William McIlvanney. The Kelvinbridge photo is from hiddenglasgow.com via Google Images, but I am unable to find the original source of the picture. The Buchanan St photo is copyright Greater Glasgow PTE, and was reproduced in Scottish Transport magazine, No33, Dec 1979. The Beamish photo is by B.T. Deans and is from Scottish Transport No.33, op.cit. The modern subway is by Steve Gillon.

The tram in Cumbernauld Rd is from Round Glasgow by Tram, by Ian G. McM. Stewart, Scottish tramway Museum Society, 1979. The tram in Riverside Museum is by Steve Gillon.  The Bud Neill cartoons are from Bud Neill’s Magic, Zippo Publishing, 1999, though I expect they were first published in the Evening Times in the late 1950s.

The trolleybus photo is copyright Alan Murray-Rust and licensed for reuse under the Creative Commons License.

British Bus Fleets 20, Glasgow Corporation Transport is by Ian Maclean, Published by Ian Allan, First Edition, 1963.  The Official Time-Table was published by City of Glasgow Corporation Transport, May 1964 edition. The covers of both were photographed by Steve Gillon. The 38 bus is from British Bus Fleets 20, op.cit. The 64 bus is from Glasgow, photographed by Douglas Corrance with commentary by Edward Boyd, Collins, 1981. The Macbraynes bus is by Steve Gillon.

The Finnieston Ferry is from the Scottish Maritime Museum collection, sourced via flickr. The Clyde HarbourTunnel is by Michael Martin of Glasgow South co-operative Club, reproduced in, Glasgow 1955: Through the Lens, Glasgow Museums, 2008, and is copyright Culture and Sport Glasgow (Museums).

Copyright: The text and the relevant photographs are copyright © Steve Gillon, 2020.